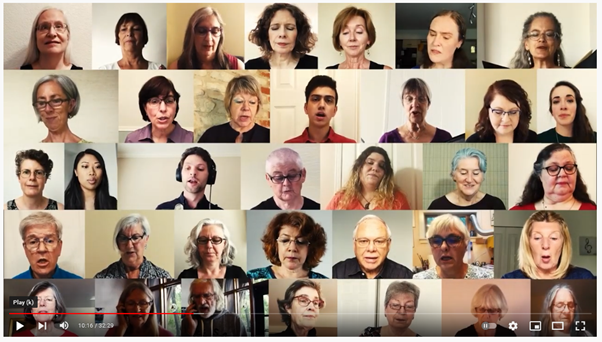 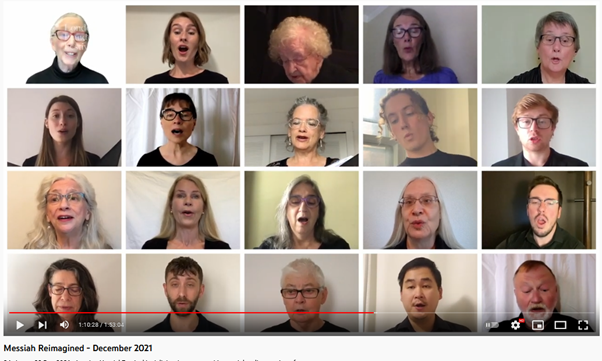 The One World Baroque Virtual Chorus is a fully virtual ensemble made up of singers from around the world.

Based in Canada, but welcoming choristers from all nations, the OWB Chorus was founded in August 2020 by Artistic Director Kathryn Whitney and Music Director Daniel Taylor in response to the global coronavirus pandemic.

The initial aim of the ensemble was to offer choristers the chance to make music together safely and to experience the joy and hope that baroque music can bring during one of the darkest times of recent history.

Through our ambitous program of global collaborative projects, many of them featuring both rehearsals and intimate lecture series with leading specialists in baroque music and style, One World Baroque singers have had the unprecedented opportunity to meet and to collaborate with some of the top early music conductors, solo singers, and instrumentalists in the world.

Since our early formation, the choir has grown to over 300 singers representing more than a dozen countries.

Known as much for our innovative and exploratory project design as for our high-quality concerts, One World Baroque goes far beyond the normal rehearsal format to engage our singers with each other and with the music we are performing.

Through our lecture series, ‘Kafee und Kuchen’ socials, Christmas Parties, and Cast Parties, we have grown to know one another – and our choir cats, dogs, and donkies – through our shared love of baroque music.

In Autumn 2021, One World Baroque were invited to be a Partner Choir of the London Handel Festival, where we sang chorus as part of the Messiah Reimagined project, under the direction of superstar conductor, Laurence Cummings.

Our upcoming events include the broadcast of our St Matthew Passion video at Easter 2022 and summer program scheduled for the last week of July/first week of August 2022.

We hope you will join us in a future project and wish you well in your music-making, wherever you may be. 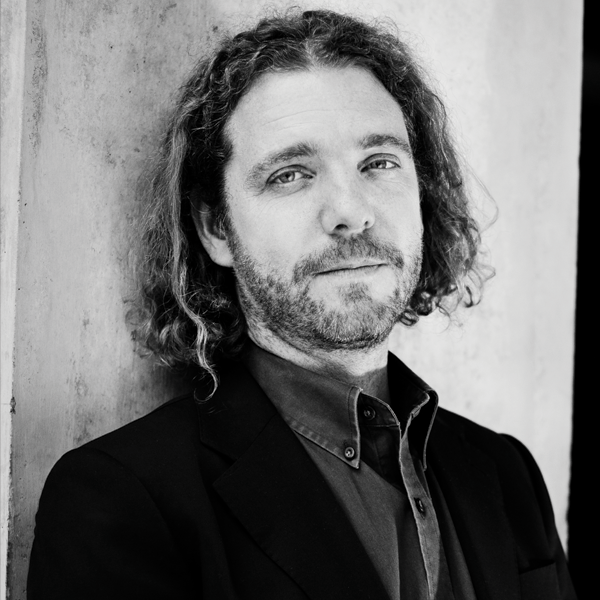 “His star is rising as fast as the speed of sound…Daniel Taylor, a new conductor on the scene breathing new life into magnificent yet neglected choral masterpieces.” Globe and Mail

Daniel Taylor is a Sony Classical recording artist, Artistic Director and Conductor of the Trinity Choir as well as the Choir and Orchestra of the Theatre of Early Music. One of the most sought-after countertenors in the world, he is the recipient of Grammy, Gramophone, Juno, Opus, CBC-SRC and Adisq Awards and the Queen’s Diamond Jubilee Medal. In December 2020, Daniel Taylor was awarded one of his country’s highest honours, the Order of Canada, for his services to music.

He made his professional operatic debuts at the Glyndebourne Festival and the New York Metropolitan Opera, and has performed with leading opera houses and orchestras around the world. With the Monteverdi Choir and Sir John Eliot Gardiner, Daniel appeared on the Bach Cantata Pilgrimage joining in concerts and recordings all over the world. With the English Baroque Soloists/Gardiner, he appeared in Handel’s Israel in Egypt at the BBC Proms, returning with the Bethlehem Bach Choir and with the Akademie für Alte Musik Berlin. His long association with the Director Jonathan Miller included Handel’s Rodelinda (EMI Virgin) and Bach’s St. Matthew Passion. Daniel appears on Cirque de Soleil soundtracks TORUK – The Story of Avatar (title role of the Avatar) and TOTEM for Universal. Engagements also include Gluck’s Orfeo and Handel’s Rinaldo at the Teatro Colon Buenos Aires, the World Premiere of Robert Lepage’s production of Ades’ The Tempest and recitals at Lincoln Centre, Barcelona’s Palau de la Musica, Wigmore Hall, and the Forbidden City Concert Hall Beijing.

Daniel is a Visiting Faculty Member of the Siena Liberal Arts University (Italy), Victoria Conservatory of Music in British Columbia, Casalmaggiore (Italy), the Académie Fourvière Lyon (France) and Amalfi Opera (Italy). Daniel has sung for Her Majesty Queen Elizabeth and live on television and radio at the induction ceremony of the Governor General of Canada at the request of the Prime Minister.

Daniel Taylor is Professor of Voice, Early Music and Opera and Head of the Historical Performance Area at the Faculty of Music, University of Toronto.

A singer, choral director, and voice teacher based in British Columbia, Kathryn Whitney is Artistic Director of the One World Baroque Virtual Orchestra & Chorus, which she founded in 2020 with Daniel Taylor.

Kathryn is also Artistic Director of SING THE NORTH – The Canadian Virtual Choir and the Pacific Song Collective. An associate of the Victoria Conservatory of Music on Vancouver Island for more than a decade, she was Artistic Director of the Summer Baroque Choral Academy, the Summer Baroque Soloists Program, and the Summer Choral Program (with Brian Wismath), as well as the annual Art Song Project. She also oversaw the Adult Soloists stream of the Summer Oratorio Program (directed by Nancy Argenta & Ingrid Attrot).

Kathryn trained in Toronto, New York, and England, where she worked as a freelance soloist, chorister, and researcher for more than a decade. A passionate teacher, prior to becoming a performer and choral director, she taught music history and aesthetics as a college lecturer at Oxford University for 12 years, with concurrent appointments at Cambridge Univesrity and the Royal Academy of Music in London.

Artist in Residence at the Royal Welsh College of Music and at Wolfson College, Oxford, she has held fellowships at King’s College, London, the Institute of Musical Research, and the University of London School of Advanced Study, where she founded the SongArt Performance Research Group with Amanda Glauert & Paul Alan Barker, which she currently co-directs with Verica Grmusa.

Kathryn’s performance, touring, and commissioning projects have received support from the BC Arts Council, the Canada Council, the Arts Council of England, among others. She has sung recitals at the Oxford Lieder Festival, St John’s Smith Square in London, for the Regina Musical Club, at the Ralston Recital Hall in Banff, at the universities of Regina, British Columbia, Mount Allison, Bristol, Cambridge, Oxford, Bangor, York, and Victoria. Concerts include engagements with Sir John Eliot Gardiner, Dame Emma Kirkby, Stephen Darlington, Steven Devine, and Christian Curnyn. A champion of new music, she has sung the premiere of more than 50 songs and song cycles, the majority written for her voice. Kathryn has a wonderful time recital touring in Canada, including with pianists Anita Comba, and Charlotte Hale with whom she showcased for both the BC Touring Council and the Organisation of Saskatchewan Arts Councils.

Kathryn holds a BA in Music from the University of Toronto, an MPhil and DPhil in Music Aesthetics from the University of Oxford, and a Postgraduate Diploma in Early Music Performance from the Guildhall School of Music & Drama in London, where her teachers were Dame Emma Kirkby and Susan McCulloch. A Graduate Scholar at Lady Margaret Hall and Somerville College, Oxford, Kathryn’s singing studies were supported by the Worshipful Company of Drapers’ of London.

Kathryn looks forward to welcoming you to the One World Baroque Virtual Orchestra & Chorus, and hopes the ensemble will inspire and encourage you in your music-making, wherever you may be.